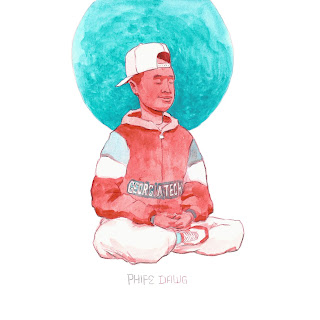 I became a fan of ATCQ when I was 11 years old, and was deeply saddened by the recent death of the Five footer MC Malik, better known to Tribe fans as Phife. Scratch that, I was in shock because I grew up on his voice. This isn't meant to be a replica of him, but rather a representation of him in peace. I won't get into his origin story or all the history, because you can go listen to his music and discover that. But I will say I always appreciated his voice, his flow, and his witty and clever thoughts. He was one of those dudes that made you think "Wow, he just said that!" when he rhymed. Nuff respect to his family, wife, the Tribe and Native Tongue Family, and all the Caribbean Americans in Hip Hop culture. And although the documentary showed the turmoil it was pretty dope to see Phife in different parts of Oakland and the Bay. RIP Ancestor Phife Dawg.