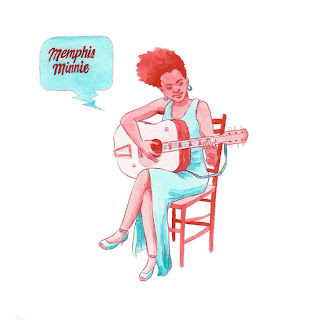 Black people have given SO MUCH to what is American culture. That just needs to be said and folks need to be reminded of it. This is a piece of Memphis Minnie, one of many of the women who pioneered what today is Blues, Jazz, Swing, and Rock. She was born in 1897 in Algiers, Louisiana and grew up in Mississippi. She got her first guitar at the age of 8 or 10 and began a life as a musician in her early teens. She began playing with what was known as Jug bands Back in the day it was extremely rare to own an electronic device that played music, so live musicians played at homes, parties, bars, on the street, etc. She recorded her first song in 1929 and would go on to record around 200 songs with a career that spanned decades. She was known to be an extremely talented picker with the guitar and was one of the early pioneer is Blues to use an electric guitar. She was married to and played with Kansas Joe, she like so many migrated to Chicago. Known as the Queen of the country blues she played until her early 60s and needs much much more attention and credit. Some of her big tunes include "when the levee breaks, Hoodoo lady blues, I'm a bad luck woman, Bumble Bee, and if you see my rooster. Some cats still play her songs today.
Sources: Memphis Music hall of fame, MemphisMinnie.com, Youtube
You can purchase this original illustration : $40 (includes shipping) 8" x 8" mixed media on paper. Email me at info@robdontstop.com