Side By Side by Marilisa Jiménez Garcia 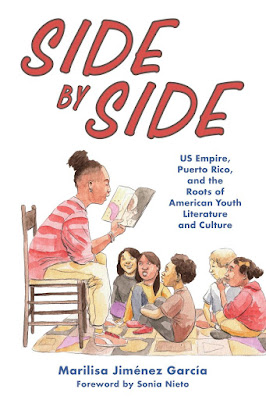 This is really cool to see! The cover of this new book features an illustration I created for a series of "story time" posters I started two years ago. I made these images because I wanted to contribute some reflections to reading rooms and areas in libraries. I've seen images of celebrities in "Read" posters but I wanted the images to be of every day people and children.
Scholar Marilisa Jiménez Garcia studies Latinx history and children's literature and has written this book "Side By Side" about the ongoing colonization of Puerto Rico and how media from the US has affected Latinx kids on the island. You can order a copy of the book HERE
Heres the description from the book:
During the early colonial encounter, children’s books were among the first kinds of literature produced by US writers introducing the new colony, its people, and the US’s role as a twentieth-century colonial power to the public. Subsequently, youth literature and media were important tools of Puerto Rican cultural and educational elite institutions and Puerto Rican revolutionary thought as a means of negotiating US assimilation and upholding a strong Latin American, Caribbean national stance.

In Side by Side: US Empire, Puerto Rico, and the Roots of American Youth Literature and Culture, author Marilisa Jiménez García focuses on the contributions of the Puerto Rican community to American youth, approaching Latinx literature as a transnational space that provides a critical lens for examining the lingering consequences of US and Spanish colonialism for US communities of color. Through analysis of such texts typically outside traditional Latinx or literary studies as young adult literature, textbooks, television programming, comics, music, curriculum, and youth movements, Side by Side represents the only comprehensive study of the contributions of Puerto Ricans to American youth literature and culture, as well as the only comprehensive study into the role of youth literature and culture in Puerto Rican literature and thought.

Considering recent debates over diversity in children’s and young adult literature and media and the strained relationship between Puerto Rico and the US, Jiménez García's timely work encourages us to question who constitutes the expert and to resist the homogenization of Latinxs, as well as other marginalized communities, that has led to the erasure of writers, scholars, and artists.

Also, check out this other book edited by Marilisa about Puerto Rico.
If you'd like a print of the original illustration, cop one here.
Email ThisBlogThis!Share to TwitterShare to FacebookShare to Pinterest
Labels: Art of Robert Liu-Trujillo, boricua, boriken, kid lit, licensing, marilisa Jiménez Garcia, Puerto Rico, side by side, story time