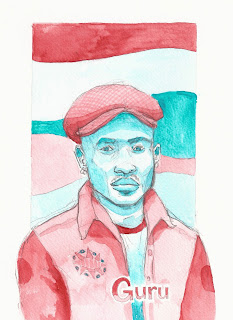 "Even in this rap game, all that glitters ain't gold. Now that rap is big business, the snakes got bold. They give you wack contracts and try to make you go pop, because they have no regard for real hip hop. They'll compare you to others and say -but yo he sells!-when you know in your heart, that he's weak as hell" -Guru on The Conspiracy
This is brother Keith Elam, better known as Guru from the mighty Gangstarr. Guru, originally from Boston moved to Brooklyn in the 80s as an MC and started a group with DJ Premier that touched a lot of people. I'm one of those people and the first time I ever saw a Gangstarr tape, it was "Step in the Arena" and my cousin Mook had it. After that I bought Daily Operation, Hard To Earn, Moment of Truth, The Owners, etc. And there are so many incredible poetic lines from Guru in them, besides his many side projects such as Jazzmatazz. He passed away in 2010 abut his spirit lives on.

"Ever since the declaration, of independence we've been easily brainwashed but just one sentence. It goes-(all men are created equal). Thats why corrupt governments kill innocent people........And every time there's violence shown in the media, usually its a black face so where are they leading ya? To a world full of ignorance, hatred, and prejudice. TV and the news for years they have fed you this". Guru on "The Conspiracy"