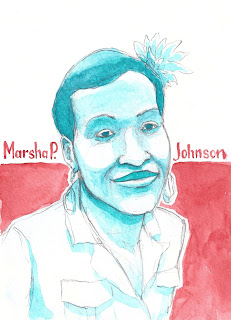 A couple of years ago I saw a documentary about Marsha called "Pay it no mind". I have always grown up around queer, gender fluid, gay, or bisexual adults and kids but I was surprised I'd not heard of Marsha until I was a parent myself. I hope you look her up and see what she did. She was out and proud at a time when there were no pride parades, no marches of support, and certainly few "out" people in popular media. Like so many queer or trans youth she had to leave her home. From what I hear it is because of death threats, disownment, teasing, ignorance, or just lack of understanding and support. Marsha moved to NYC . She was fabulous, extravagant, kind, supportive of other gay, trans, or queer youth and she was a homeless. She along with many folks set off what was to become the "Stonewall riot" and became an activist alongside Silvia Rivera and many others fighting for Gay rights, affordable medication for Aids patients, etc. Silvia and Marsha founded an organization called STAR-Street Transvestite and Revolutionary, the first organization to reach out to homeless trans youth. When we think of Black History Month all across the US, gay, bisexual, transgender folks are often invisible. I believe all black folks should be celebrated for their humanity and their achievements.