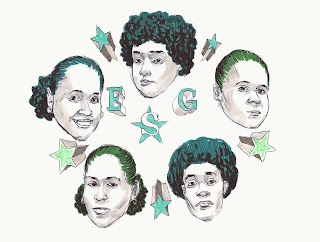 Emerald, Sapphire, and Gold is a band of sisters, there was a brother in there too. They are from the Bronx, NY and to stay out of trouble their parents got them musical instruments and encouraged them to play. They released a record in the early 80s which bent genres of funk, rock, techno, and some sounds that couldn't be described as anything but new. I wrote about them for Muphoric Sounds back in 2011 for the "In the trunk" series and the thing I love about them is that they're a family, the are still playing and recording new music, and their style was striped down and to the point. No extra BS on top, just raw music. In some ways discovering them and listening to their sound through samples first, then through the original songs is quintessential New York because it is about dancing and having a good damn time. Shout out to Mister Bouncer who played songs like "Erase you" and "Ufo" for me first.

Want this original drawing? $60 or Print? $20 (includes shipping)
Got an idea for an org to donate 30% cost to? Email me info@robdontstop.com