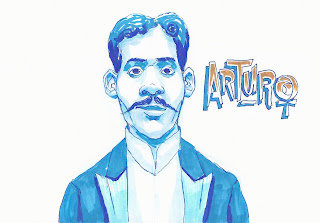 The way I first heard about Arturo Schomburg was from living in NYC. And I was 26/27 when I first moved to NYC. One of the reasons I think ethnic studies is so important in all schools at all levels is that both white and children of color are getting a fraction of their history. Imagine how many people still don't know about him, the center, or his work. This brother was Afro-Latino. What does that mean? He was born in Puerto Rico, spoke spanish but was Black. Why? Because Africans were stolen from the continent and dragged to work in slavery in the US and caribbean and South America. Arturo was a journalist and a scholar who collected articles, papers, and books about who Blacks and Afro-Latinos are. He collected so much of it that it became the basis for a library in Harlem where countless people have gone to research and go back to find out who we are. One of the reasons why he searched for our history is because a teacher told him that he and his people had no history. And if you look out most forms of media today that depict or retell history-it is like they're saying the same thing. One day we'll see a narrative film about him.