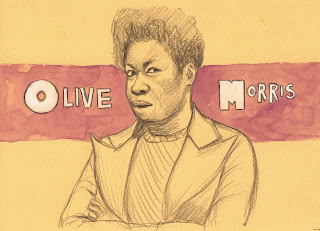 Props go to @Gabstamatic from "I am the Nu Black (UK)" for making me aware of this great Woman. Olive Morris was an activist from the Uk who worked for Black liberation, women's rights, and housing. Born in 1952 in Jamaica, she moved to the UK with her family as a child. She died very young at the age of 27 from a form of cancer, but not before she founded or worked with several prominent activists groups in the UK such as the Brixton Black Panther Party, the bBrixton Black Women's Group, the Organization of Women of Asian and African descent, the Manchester Black Women's Group, the Squatter Movement, and many more. She also left an astounding impact on so many people, a multi-generational group of educators, activists, and students founded a group called ROC "Remember Olive Collective" to put together a narrative and story of her life and accomplishments.  From what little I've read, she was a student of sociology, an organizer and an activist who helped to organize strikes, supplementary schools, pickets, groups of people to purchase homes, and
not only spoke about what was happening to Women of Color and Black folks in the UK, but  walked the walk. I would much rather see a film of her life than any Hollywood sequel redoing a film from the 70s or 80s.