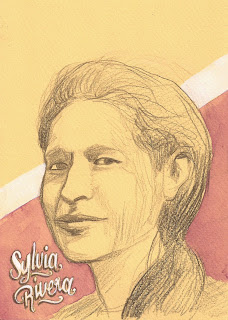 Sylvia is the one who threw the first bottle. She was one of many who set it off. Sylvia was a Puerto Rican Trans woman who lead a life of activism for young gay and trans youth in the city of New York. Along with Marsha Johnson and others she dealt with the harassment, the threats, and bullying of the NYPD, straight society, and even fellow Gay and Lesbian folks in their movement. Sylvia lived from 1951 to 2002 and inspired a generation of LGBTQ activists to stand up for their rights. I'm still learning and admit that I know very little about the Gay Rights movement, or the lives of Trans folks, but I do see that their history, herstory, stories need to be told so people learn about the discrimination, homelessness, activism, triumphs, legacy, classism, patriarchy, and love that is their story. Sylvia founded an organization with Marsha P Johnson called STAR-Street Transvestite and Rvelutionary. This organization pioneered advocacy and support for young gay and trans youth who were on the margin, kicked out, ignored, and murdered simply for existing. She challenged Gay and Lesbian activists who wanted nothing to do with trans folks and by throwing a bottle at the NYPD, she helped to ignite a rebellion that no longer accepted being oppressed. I consider her a woman to be talked about more during "Women's History Month" for Latinos, people of color, lgbtq folks, and straight/cis people like myself to learn about.