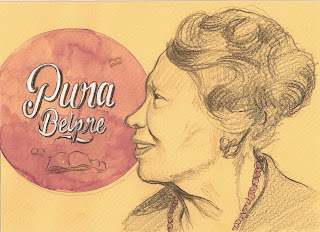 Pura Belpre was NYC's first Puerto Rican librarian. She was a storyteller, educator, and a pioneer in library programming and learning for children. She was born in 1899 in Puerto Rico and came to the US in 1920. In 1921 she began working in the New York City public library system. She has been called a pioneer because of her outreach to the Latino community offering programming in spanish. She founded a mobile puppet company that went around the neighborhood performing her stories. She looked for and purchased books in spanish for the library when multicultural literature was not a thing. As a storyteller she brought stories from her country like "Perez y Martina" and shared them with the children uptown, while also translating them and publishing them in books for the first time. Because of the amazing work she did as an advocate for literacy and education in the community an award has been named in her honor by the American Library Association. I did not hear a single thing about Ms Belpre until I was in my 30's. But, her dedication to engaging children and getting them to read inspires me. And I hope that more about her life is uncovered and that we as kids and adults learn about stories like hers. Check out the book "The Storyteller's candle" and the documentary by the Center for Puerto Rican Studies at Hunter College called "Pura Belpre" https://vimeo.com/30837106