Who is She? 21- Deldelp Medina 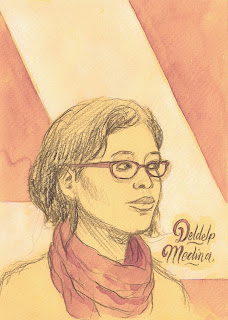 A Colombia native and Bay Area home grown entrepreneur/ activist Deldelp has done something no one else in the tech scene has done. Please correct me if I'm wrong, but from what I can tell she is the only Latina (Latinx/Raza/Indigenous) woman to be the CEO of a start up tech company that nurtures and assists other Latina's to build their own companies. Ms Medina started "Avion Ventures" in 2014. It is what is known as a start up accelerator. It guides women, helps them develop their ideas, practice their pitches, mentors the, and helps them get the support they need to be entrepreneur's. Deldelp has worked to promote Latino culture through Cine+Mas (Latino Film Fest), as an activist with California Crime Victims, and worked in development and management through multiple non profit organizations,

Why is Avion Ventures revolutionary? Well, without getting into a huge history lesson about colonization, white supremacy, wealth gaps, and the myths of meritocracy I'll just say that numbers don't lie. Some of the biggest names in tech have disclosed their numbers on who is working for them, and for such huge companies which serve everyone and claim to be for everyone they are ignoring a huge group of people who already make up the majority in the US. Not only are they not paying attention to Latinas and Latinos but they are loosing vital ideas, genius, and insight into communities they may not know intimately. Engaging Latin@ communities is not only good business if companies wish to stay relevant, its 2016. Come on!

Also, it takes a huge amount of resources, money, time, and risk to start your own business which I know as a freelance artist. Also, in order to succeed in tech, that factor multiplies; not just for resources, but who you know who is connected. So, as Deldelp has said, she has been in too many rooms where she is the only woman, the only bilingual speaker, or the only person of color. That needs to change and she is leading that change alongside organizations like Code 2040, Hack the Hood, Latina Geeks, and Black Girls Code, and the Latino Start Up Alliance.