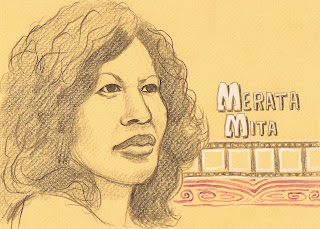 Merata Mita was an indigenous Maori filmmaker from new Zealand. Born in 1942, she was thr first woman in NZ to direct a documentary film. Patu! , her first film was about the protests and acts of civil disobedience that many New Zealanders exhibited when a rugby team from the then apartheid state of South Africa came to play matches in NZ. She went on to direct and act in several films, saying that she wanted to tell stories instead of give foreign filmmakers the key to Maori lives. She was a pioneer in NZ pushing the filmmaking forward in the country. A documentary by her son about her life is in the works and Sundance has named an award for film after her.