One of my best movie experiences

There’s a lot of movie experiences I’ve had in my life that were memorable. I’ve always loved films because my mother and father loved films, especially anything that was heavy in narrative and fantasy. But one particular experience that sticks out is when I went to see Batman Returns in 1992. I was about twelve years old at the time and my big cousin Mook had planned going to go see it.

He was as big a movie fanatic as I was. Actually we shared an appreciation for many things such as music too. But this film was an experience because of three basic things: the journey, the scope, and the relationship I had with my cousin. But first a little background on the city.

In the San Francisco bay area there were historic sites that gave you a very nostalgic look back into history, much like New York. The city was officially founded around the mid 1800’s. The Ohlone and Miwok indigenous tribes were murdered and run off their lands starting in the mid 1500’s, but it wasn’t until the establishment of the Mission’s by the Spanish, the gold rush that gave way to the “Forty Niners”, where thousands of European settler’s moved out west to strike it rich in gold, a huge recruitment of Chinese immigrants to build the railroad that really started to bring people there. Even more so with the foundation of labor unions, Treasure Island, the Port of Oakland, and the huge amount of work being produced because of the World War in areas surrounding the city such as Richmond, ca. Labor is one of the forces that brought so many African American families from the south to the city. This is huge because it brought my grandparents there.

So, one of the historic places that is now closed is a theater on Geary street in the Fillmore section of the city, known for its historic presence in jazz and regal black history. The name of this theater was the “Coronet” and it was huge! Imagine a regular theater today with twelve to fifteen smaller theaters in it. The Coronet was the size of at least four or five smaller ones put together. It was big! And that is where you went to see a film like Batman with all of its action and fantasy details.This was before comic films were such a craze that there was a new one of them coming out every single year.

I remember my cousin told me to be at his house the night before so that we could get up at 6am, crazy right and mob over there to be among the first people in the city who had seen the film. It’s different now days because you can find the film online before it even comes out. To give you a scope of internet, I didn’t start using
emails until about seven or eight years later. Man, it was cold, windy, and surprisingly bright on Geary street that morning, and one thing that made it comforting besides the fast that I was going with my cousin Mook, who really I considered the big brother I never had was that there were hella (a lot) of people already there! I thought he was crazy for wanting to go so damn early and here we are staring at a line of people. He wanted to be first in line I think. It just goes to show that we took seeing films seriously and it was an event.

And it was worth it if you like fantasy and action. Batman returns was one of the most expensive films of its time. It’s predecessor the first Batman starring Michael Keaton and Jack Nicholson was one of my favorites, Not only because of the film itself but because Prince did the soundtrack. But that’s another story. This film starred Michael Keaton again, Michelle Phifer, Christopher Walken, and Danny Devito.

The characters they were playing from the comic were Batman of course, Catwoman, I can’t remember Mr. Walkers character, and the Penguin. Classic! One thing that tripped me out that I consider subliminal back then and overt today is symbolism. A lot of people who were waiting in line were wearing the yellow and black logo of the film. I mean, people had shirts, cups, belts, all kinds of stuff. I thought it was corny to wear, but people really got into it. Warner Brothers studio was smart though, because the power of the symbol for people to identify themselves, a movement, or even a
character is powerful.


One thing that made the film powerful is that I got to hang out with mycousin. Ever since I could remember I looked up to my cousin. Whatever he wore, I wanted to wear. Whatever he listened to in hip-hop I was buying. I even wanted to have a girlfriend like his because she was so laid back. I certainly wanted to roll like him because he had a 71 Nova with beat (a good stereo) that made the bumper rattle when he turned it up. Plus, he always had a fresh cherry air freshener hanging from the mirror which makes the memory come back every time I get into someone’s car with that scent. But beyond those thing, his character was and still is very strong and confident in a quiet and humble way. He never shouted, got angry, or lost his patience even though I’m sure I asked some stupid questions in my time. Like “what did you do to get you’re girlfriend?” Everyone called him “Mook”, but his real name was
different. He had a swag that was an imprint in my brain way before the term transformed from "charisma". I have always strived to be as calm, cool, and collected about life as he was. To this day we don’t see each other as much but without saying it, the love is there. Now that his son is damn near in high school and mine is about to start kindergarten, life sure has changed, but I’ll never forget that day. We had a blast and life was simple.

For all my hip hop heads, the albums that came out that year were history making:

-The Pharcyde’s “Bizarre2, Redman’s “Whut the album”, Diamond’s “Stunts, Blunts, and Hip” hop, The Chronic by Dr. Dre, Spice 1’s first Lp, Common Sense’s “Can I borrow a dollar”, Too Short’s “Shorty the Pimp”, Compton’s Most Wanted’ “Music to drive by”, Grand Puba’s “Real to reel”, Ice Cube’s “The Predator”, The Lenchmob’s “Guerillas in the mist”, Pete Rock & CL Smooth’s “The Mecca and the Soul Brother”, Gangstarr’s “Daily Operation”, and Boogie Down production’s “Sex & Violence”. I could go on but these are just some of the LP’s that were slappin at the time. I think the Click’s “Down and dirty” came out that year too. At least that’s around the time I remember hearing about a dude named e40 who bay areans all know and love now. Damn, I feel old!

“when I was a teen I did nothing else, but pick up a pen and express myself” –who remembers who said this? 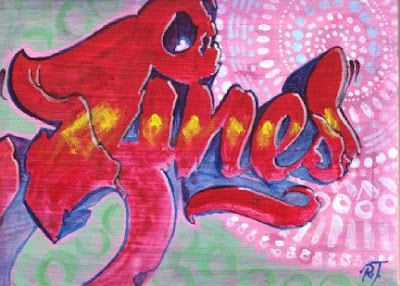 Hey folks, i havent posted anythign in a billion yrs-school, life, no time. But im gettng back on it.
peep this ptg i did at the Richmond Zine fest.I like it, its up for ur collecting pleasure at
http://mrroberttrujillo.etsy.com

SS vol.2 is coming out soon! Also, look for a new Oneirokrites, and one other goodie that you'll have to wait for.
0 comments
Email ThisBlogThis!Share to TwitterShare to FacebookShare to Pinterest
Labels: hand lettering, zines
Newer Posts Older Posts Home
Subscribe to: Posts (Atom)