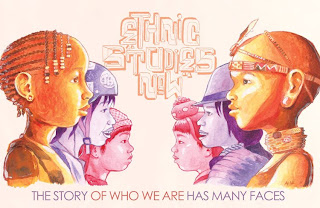 I was super duper blessed to be commissioned to create the artwork for this poster for this years Akonadi "Racial Justice" poster by the Akonadi foundation. The foundation does some important and vital work to push racial justice to the forefront of organizing and activist discussions here in the Bay Area and nationally. Without folks like them, we would not be forced to ask hard questions until another tragic event happens or another Ethnic Studies program is banned.

I first applied to compete among some great artists in this competition back in 2010 I think. I did not win, but i think showing up and fighting means something because they commissioned me to create this years poster which will be seen by many I hope. More importantly though, I hope people will think about the fight going on to maintain, introduce, and expand ethnic studies programs here in the US, in so called progressive cities, and all across the US. Not just in universities, but in public schools because that is where it is needed the most.

One of the biggest ways you can bring a people down, treat them like shit, ignore them, render them invisible, and oppress them is by convincing them that they have no history (that they don't exist). And with people of color here in the US that is especially important because our ancestors built this country with their blood and their backs. I get so frustrated when people try to squash race or pretend that its not an issue when you look at who's story is being told in depth, with honesty, humility, intelligence, love, and passion it is not always ours.

The issue of ethnic studies is very personal to me because I come from a family of many diverse backgrounds. Asian, African, Latino, Indigenous, and im sure European somewhere in there too. My son comes from even more! My grandparents combined spoke 4 languages. Growing up I overstood the diferences and similarities between my cultures and my families, but there were also times when i didn't know who I was. And when i saw some people suffer or some people treated unjustly, I wondered what i could do. Fast forward, I'm doing something. Not just highlighting the negative but giving a voice to my story, one which i hope more children and adults like me can relate to. 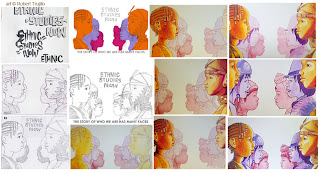 Anyways, check out some process shots and share the theme. The faces you see are African American, East African ( Massai), Ecuadorian American and Ecuadorian, Korean American and Korean. Each one of the young people on the right are wearing something from their culture that represents  a right of passage or a symbol for young adulthood from the jewelry, the hat, etc. These are symbols of attire that i researched. i wanted to show North American children of color with a cultural reflection that they could be proud of.
0 comments
Email ThisBlogThis!Share to TwitterShare to FacebookShare to Pinterest
Labels: Akonadi Foundation, Art of Robert Trujillo, ethnic studies, Ethnic studies conference

The Awesome Foundation talk by Christina Xu. She's funny, i like a sense of humor when talking about problem solving.
0 comments
Email ThisBlogThis!Share to TwitterShare to FacebookShare to Pinterest
Labels: Funding, inspiration 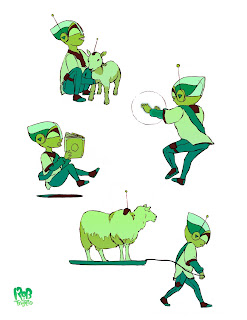 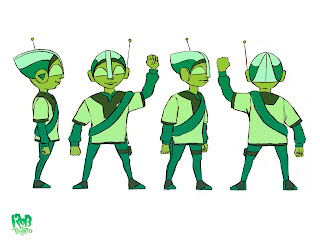 the original song the Benji B(uk) remix with strings the Ahmed Sirour remix w/ strings Each one slightly different. I didn't think much about Birthday Sex when I first heard it, except all of my younger co-workers at a school in Brooklyn played that song over and over once the boss left. I like this song though. It was Ahmed's remix that brought me to it. Peep the facial expressions in Benji B's video. Some of them are clearly not feeling it, but hes into it. Haha. Back to resting from a cold. 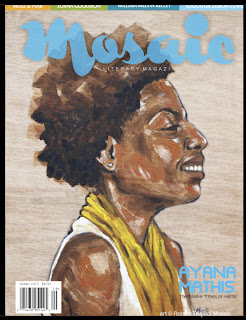 This is the second time I've had the pleasure of illustrating the cover of Mosaic Magazine. If you are one of those who search and yearn for more people of color in literature, if you would like to learn about African American authors, you need to get a copy. 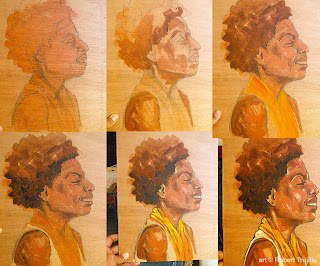 The last time I illustrated the cover of writer/author Tanehisi Coates and write a piece about comic illustrator Dawud Anyabwile. This time I get to paint author "Ayana Mathis" author of "The twelve tribes of Hattie". Ayana recently garnered a lot of support after appearing on a certain someones book club. Also in this issue, Zadie Smith, author of NW, White Teeth and many others. Heres a few screen grabs until I get my physical copy.

Shout out to art director Ron Kavanaugh for giving me the chance to do this. It is a worthy cause and an honor...

Did this zine for fun back in the day, had it in spots in NYC, TX, VA, DC, MD, LA, The Bay, I think it was even in Canada and New Zealand at one point. The thing i love about zines is that there are no rules, everything is fair game. No art directors, clients, or people to please…just you and the reader (eventually). Think I may make another for fun! Folks like Christy Road, Shotgun Seamstress, Cometbus, Travis Fudge, Morning Breath, and so many others made me want to make one to start with, and eventually I made four… These are some shots from the Zine opening at Fresthetic Gallery in Brooklyn, Ny. A whole lot of homies came through to help me celebrate this and it was awesome! Time I do another show, no? 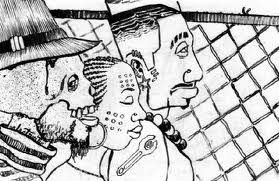 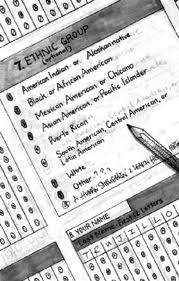 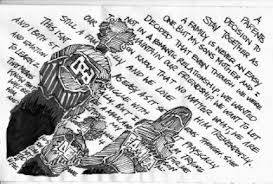 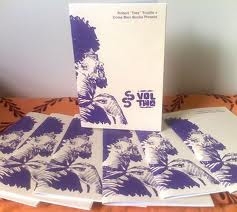 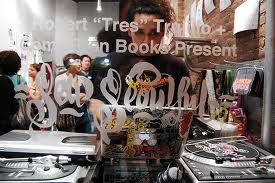 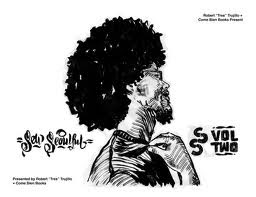 Video from the event 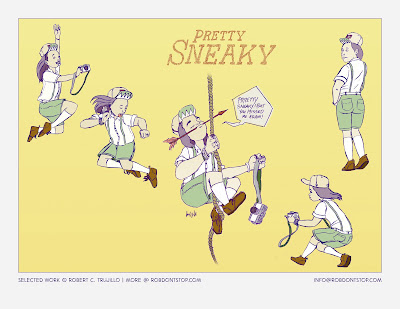 Pretty Sneaky was inspired by a Dj Qbert scratch. Not really related at all, just inspired by. As you were...More character designs coming.... -Rob
0 comments
Email ThisBlogThis!Share to TwitterShare to FacebookShare to Pinterest
Labels: Animation, Art of Robert Trujillo, character design, people of color


Inami teaser 10 by com1toon
This is something you dont see every day, a french Animation studio produces a cartoon about an Amazonian child named Inami. Caught this the other day with my son and was pleasantly surprised.
0 comments
Email ThisBlogThis!Share to TwitterShare to FacebookShare to Pinterest
Labels: Animation, Children of color, inspiration, Inspiring stuff 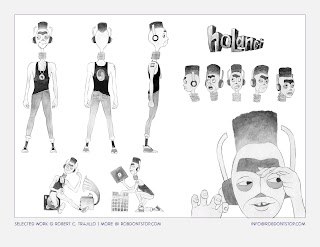 Holangi is a korean word for "tiger". More on this guy to come. But basically, I've been teaching as an artist in many many schools for nearly a decade. It's time to affect change in a slightly different way. Character design for Animation. Those of you who follow my blog posts regularly already know. Those of you who are getting hip, look for more of this and more new series' of artwork. As with everything, I'll be putting my own spin on it.
2 comments
Email ThisBlogThis!Share to TwitterShare to FacebookShare to Pinterest
Labels: Art of Robert Trujillo, character design, Holangi

Let them win, and help them understand that winning is losing to. So, one of the things I learned about being a parent is to take cues and lessons from other parents. While living with friends I noticed how different their play and games routines were from mine. Didn’t take away anything negative about theirs or mine, just made me aware of some things I wanted to incorporate into my sons life and mine. One of the biggest on my agenda was games. My son has a wii, which I was against at first. But his abuelita bought him one and what can I say? His mom wanted him to use it at their house. But, I wanted to do something playful that involved thinking and strategy.

So, I noticed my friends played a lot of board games. I never really played them heavily as a kid. I knew of them and played occasionally, but I always find myself having to reread the instructions as an adult. So, one night my boy is at a friends house playing a game called “Stratego”. Now mind you, I’ve already done my Christmas shopping, but I went back to get more board games because it interested him.

Fast forward, we’ve started to play "Trouble" and "Stratego". I got Scrabble as well, but breaking these other ones in first. So Stratego is kind of a war game , an easier version of Chess. And Trouble is a game of completing laps with figures through chance. My son loves both of these games and loves winning! BUT, he falls apart when he loses. I’ve done my best to be calm, not react too much. I simply state that he must be a good sport and congratulate his opponet the way they do in soccer practice. I've beaten him and I've let him win. Why? I could let him win all the time, but I think that is building false hope because once he comes across a worthy opponet he will lose. And I don’t beat him all the time because I want him to understand that he wins some and loses some, but that the point is to keep playing. The more you play the better you become.

This is definitely trial and error, but I feel that letting them win some helps them build confidence and makes them eager to improve their skills. I also think beating him every now and then is good because him to respect defeat. More on this as it progresses. The most important thing though for me is building the ability to think critically in a different way.
3 comments
Email ThisBlogThis!Share to TwitterShare to FacebookShare to Pinterest
Labels: children, Daddy thoughts 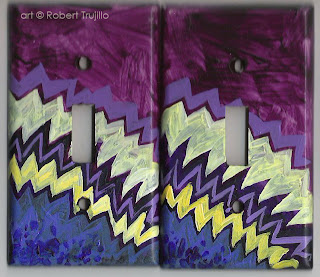