Shop shutting down- Get it now! 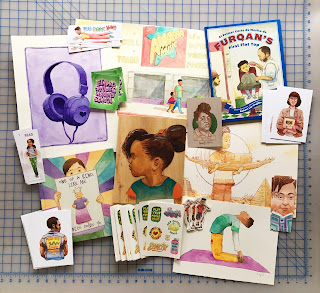 Fam, it's been a long year. I will be taking a short break from selling merch (prints, books, stickers, packs, etc) in my shop tomorrow (December 22nd at 10 am pst). If you'd like to get something from me I'd suggest you get it now.
Here's the LINK
0 comments
Email ThisBlogThis!Share to TwitterShare to FacebookShare to Pinterest
Labels: Art of Robert Liu-Trujillo, merchandise, selling merch 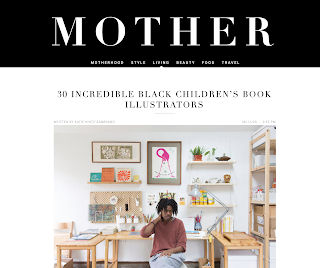 Yo, so this happened! I posted this on social media but wanted to mention it here. I am mentioned as one of 30 Black children's books illustrators. I am pretty juiced about this because it is nice to be acknowledged for your work every now and then. I know there are tons more illustrators out there and a bunch of cats I know who are super skilled. But, I accept this recognition and it feels good to share it. Thank you Mother Magazine. 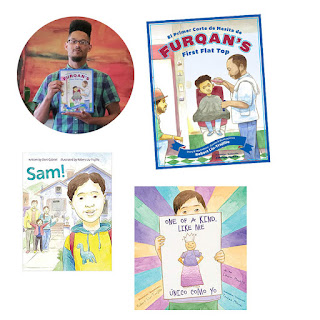 Please go to their site and read the post. It has a bunch of really talented veterans and new artists in it. Some of which I've actually met in real life. Like for real for real. Haha.
You can check out other features or interviews here.
0 comments
Email ThisBlogThis!Share to TwitterShare to FacebookShare to Pinterest
Labels: Blog feature, children's books, kid lit art, mother magazine, press, press feature, Robert Liu-Trujillo

Yo, just got an email from Waxpoetics with a link to this short doc about the magazine. This shit is really a dope magazine if you love hip hop, funk, jazz, soul, electronic music, etc. At the time when WP came out I bought the first or second issue (Berkeley Ca 2001?) because it had some art from Style Wars on the cover (classic graff film). And when this video was filmed I was actually living in NYC and contributed an illustration of 9th Wonder to the Hip Hop issue. Peep that here.
To see John Carlucccio's (Battle Sounds Doc) higher quality version of the video, go here.
In case you missed it, WP left the scene for awhile and now they're back. Not only with new magazines fresh off a kickstarter, but also with new videos. Peep this one about Chicago DJs and musicians.
Curtis Mayfield, Ron Trent, Crate Diggers record fair.
0 comments
Email ThisBlogThis!Share to TwitterShare to FacebookShare to Pinterest
Labels: Art of Robert Liu-Trujillo, inspiring, Inspiring stuff, journalism, listening to music, magazine, Music, print magazine, stuff ive been listening to, waxpoetics

Here's a video recording of a panel discussion I did which was fun featuring artists from Ohio and other places across the US for the annual SOL-CON. Shout out to Katlin Marisol Sweeney for moderating!
0 comments
Email ThisBlogThis!Share to TwitterShare to FacebookShare to Pinterest
Labels: columbus ohio, comics, diy culture, panel, self publishing, Sol Con

Got a chance to do some graphic recording for Alameda county this past month which was a fun break from much longer projects. This is a video explaining some of the basics about covid meant for Alameda county students I believe.
In case you missed it, here's my post about how to work with me. Graphic recording is one of those ways.
0 comments
Email ThisBlogThis!Share to TwitterShare to FacebookShare to Pinterest
Labels: Alameda County Health Department, Art of Robert Liu-Trujillo, Graphic recording 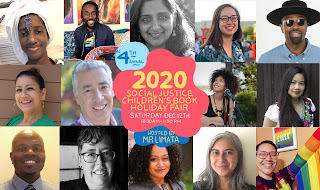 These are just some of the people organizing and/or reading at the 2020 virtual
"Social Justice Children's Book Holiday Fair"
SNEAK PEEK: 2020 AUTHORS AND PRESENTERS!

We're finalizing Saturday's program and wanted to give you a quick peek at a few of the incredible people who'll be joining us this year:Jesse Byrd – author of Sunny Days and Real Jungle TalesGrace Carroll – author of Akira’s Animal Alphabet Alliterations and The First Ten DaysMichael Genhart - author of Accordionly and Rainbow: A First Book of PrideJill Guerra – author of When I Breathe Deeply and Long Hair Don't CareLourdes Rivas – author of They Call Me MixMeera Sriram – author of A Gift for Amma and The Yellow SuitcaseJustine Villanueva – author of Jack and Agyu and Mama Mama Do You Know What I LikeDr. Khalid White – author of Little Brother, HermanitaMore to come!
LINK TO PARTICIPATE
Did you see the panel discussion some of the organizer recorded? Peep it HERE 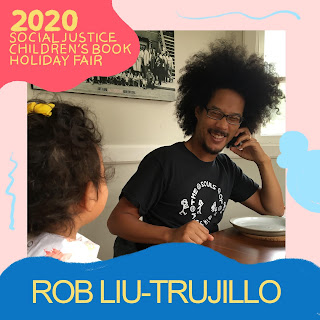 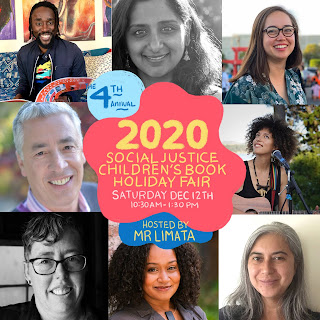 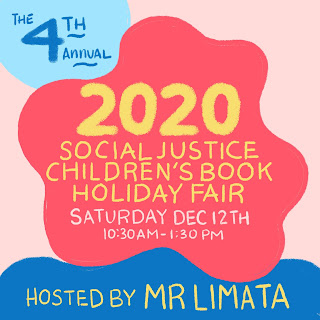 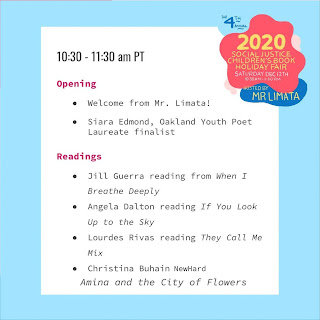 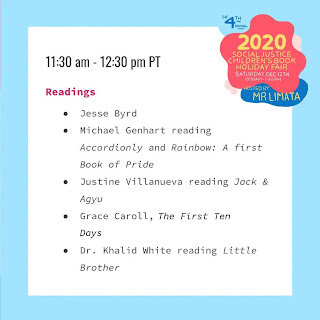 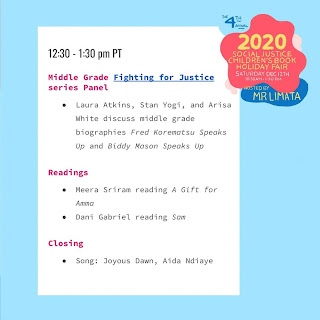 Hey folks here's a panel video leading up to the 4th annual Social Justice Children's Book Holiday Fair!
Here Me, Laura Atkins, and Innosanto Nagara discuss how the fair started and why this year is important with educator and storyteller Mr Limata (Follow him on FB, IG, or YT).
Check out the video and heres the facebook invite for the event coming this Saturday Dec 12th at 10:30am!
LINK!!!!!
0 comments
Email ThisBlogThis!Share to TwitterShare to FacebookShare to Pinterest
Labels: children's books, Innosanto Nagara, kid lit, Laura Atkins, Social justice, social justice children's book holiday fair, story time with Mr Limata 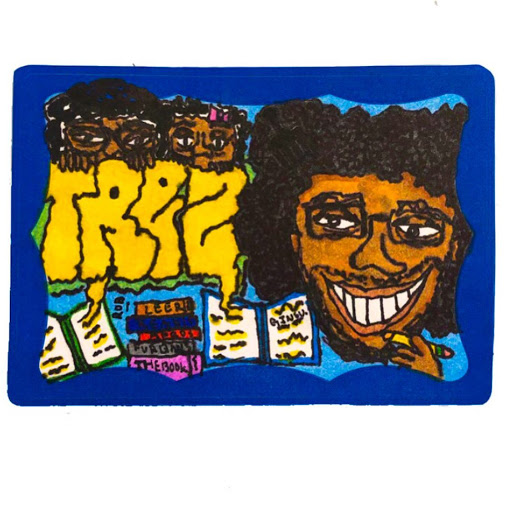 Yoo, this is freaking cool. My sister Cece Carpio's niece drew me and my bro Bounce! You can follow here IG here 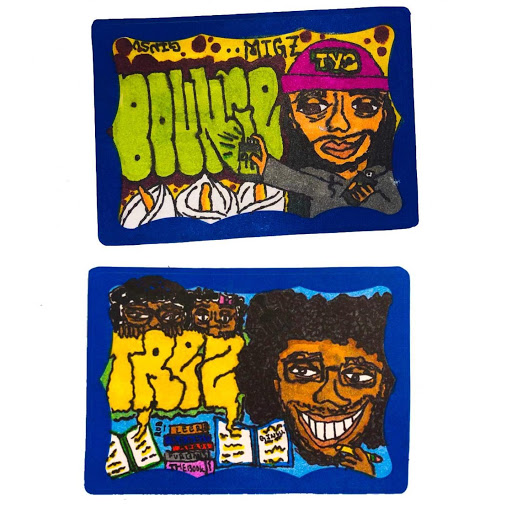 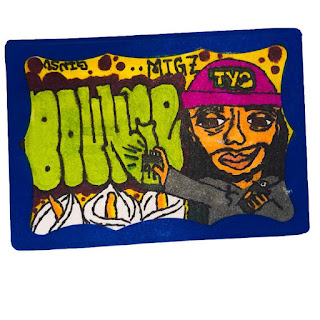 Super excited to share this new collaborative piece with you. It comes to you via designer and podcast host Maurice Cherry of "Revision Path". Here's the mission:

"Recognize" is a design anthology that features essays and commentary from indigenous people and people of color - the next generation of emerging design voices.

The first piece is an accompaniment to Maurice's introduction: 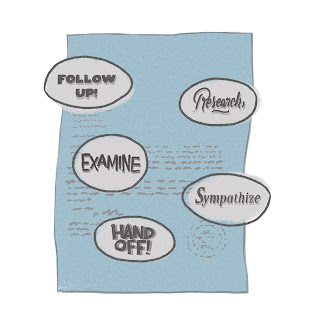 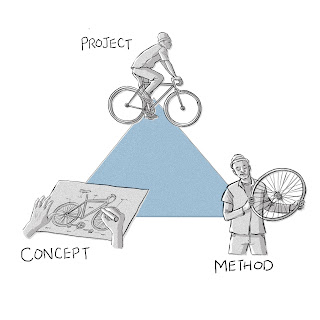 And the final essay is by Regine Gilbert and is about keeping your design fresh! 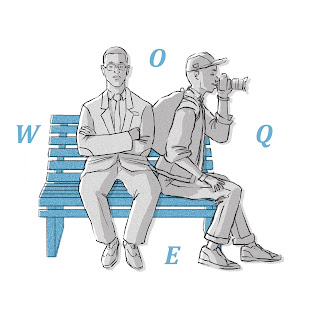 Did you see the first edition of Recognize? Here's the LINK