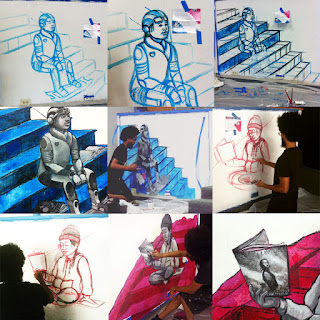 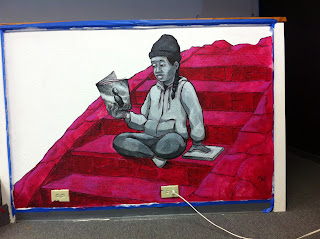 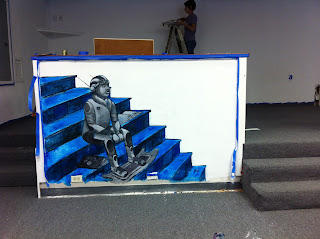 Just finished these two murals. They are replicas of illustrations that I created recently for Chapter 510's "Make Believe" campaign. Ok, so I painted because I was commissioned to, but I believe in the work that the organization does. What do they do? They engage young people in learning to read and write. If you can read, you can see "poison" in the ingredients of the food you are eating. Feel me? And if you can write, they cannot write you out of history.
If you are in the Bay Area and are down with that (as many Bay Area organizations are) come through to the next First Friday October 2nd in Oakland at 2301 Telegraph ave. 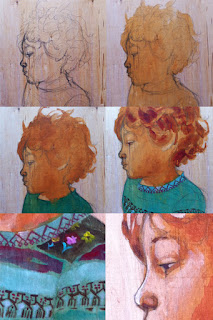 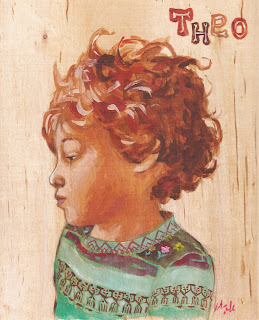 This little dude is 6 years old and comes from a Russian, Ukranian, Polish,  and English. If you are interested in a hand made/painted portrait of your child, please click HERE.

My son is in love for the first time. Not with a girl or a boy, though he has mentioned a young lady that he admires greatly. He smiles when he mentions her, but I can’t divulge more because he would be mad if I did. What I mean is that we share our first love together. He loves it and so do I. I’m talking about hip-hop.  As I sit playing the instrumental to this classic, I can’t help but feel nostalgic and somewhat emotional. He actually likes it.

How do I know he’s in love? (I’ve written about him rocking out before, because he was about that “Twisted Sister” life for real) I know because he has an uncanny ear for memorizing songs, lyrics, and melodies quickly. When I play records, and I play them a lot I know he’s listening closely because he’ll ask to hear this or that again. I took certain records like “The Message”, “The Biz Mark”, and “Sucker Mc’s” down from the higher shelf so he could play them and look at the covers. And he did! He picked out LL’s “I Can’t Live w/out My Radio” and put it on. He took out “King of Rock” and put that on. The other day, I put on a record…I can’t even remember which one. But I felt so much pride seeing him just nod his head to the beat. I mean, he’s playing with his lego’s and setting up an imaginative battle scene from the “D-Day Invasion” (yes , he’s that specific about them) and I put it on and he just starts nodding his head. I look at him and smile, he smiles back, and goes back to what he was doing.

I don’t want to overwhelm him, but I have so freaking much I want to show him and tell him. This music and this culture the sounds, attitudes, codes, rules, herstory, past, present, future. agggh! There’s so much. I mean, I’m giving him little pieces right now of “Ladies First” and “Kriss Kross”, but I cannot wait to play him “Nautilus” or “ You Must learn” when he’s ready to really hear it, you know what I mean? Right now, its all the catchy choruses which is fine, because I used to buy an LP and listen to the single over and over.  He loves the songs he hears on commercials, video games, and at Warriors games so I have to tell him who this or that person is, while at the same time playing old funk , jazz, or boogaloo records too. There is so much knowledge, wisdom, and beauty in the music and culture that got me through tough times, decisions, cross roads, failure, happiness, and triumph. I know there are plumbers, nail technicians, and veterinarians somewhere that are passing down knowledge and love to their little ones. What do you absolutely love that you hope your child appreciates when s/he is grown? Holler in the comments.
2 comments
Email ThisBlogThis!Share to TwitterShare to FacebookShare to Pinterest
Labels: children, customs, Daddy thoughts, herstory, hip hop, history, Music, parents, rituals

Store has new prints up 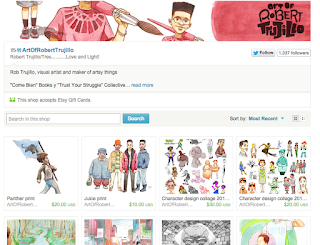 Just want to remind folks that I have a store with prints and portraits up. If you're so inclined, to a look at THE SHOP now and pass it on.
0 comments
Email ThisBlogThis!Share to TwitterShare to FacebookShare to Pinterest
Labels: Art of Robert Trujillo, illustration, prints, store

Visions from the Inside show up in SF 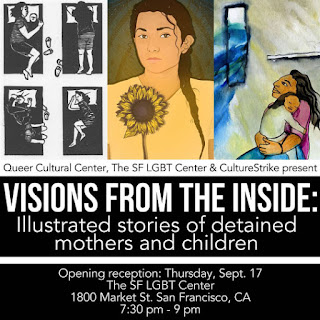 If you are around this thursday, please go see some of the art and meet some of the artists behind "Visions from the Inside". These are illustrated stories that tell the stories of immigrant families and children being detained in the U.S. I was lucky enough to have a piece in this show. Go check it out.

0 comments
Email ThisBlogThis!Share to TwitterShare to FacebookShare to Pinterest
Labels: Culture Strike, End Family Detention, illustration, Visions from the Inside

ORIGINS OF THE VILLAIN


ORIGINS OF THE VILLAIN from NOw FUTUR on Vimeo. My brain feels like this sometimes
0 comments
Email ThisBlogThis!Share to TwitterShare to FacebookShare to Pinterest
Labels: inspiration, Inspiring stuff, mf doom

Stuff I've been listening to - 8 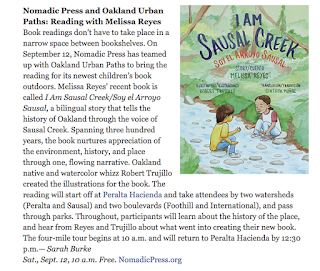 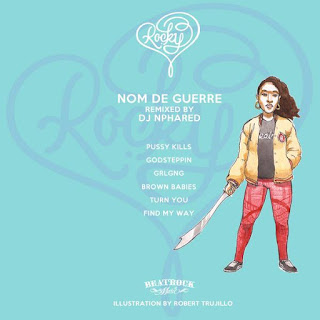 The homie Rocky Rivera is on her grind as always (many albums and EPs deep) she just dropped this! Remixes of the Nom de Guerre EP by Seattle's DJ Nphared. It slaps. And peep the use of the Rocky character! Goes well with the design (also by Nphared I think). 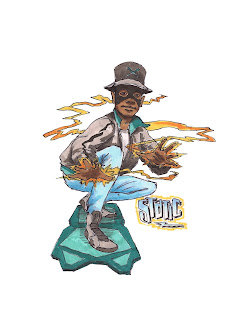 Static! Just found this character recently, but i wish i'd found him in 93 when he was created by Milestone! Cant wait to see a "Static Shock"
0 comments
Email ThisBlogThis!Share to TwitterShare to FacebookShare to Pinterest
Labels: Art of Robert Trujillo, character design, milestone, static shock 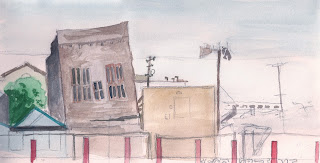