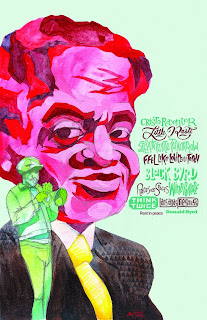 I can't believe I have not done a new Jazz Portrait since October. A compilation poster of all the portraits and the typography thus far will be ready soon for your viewing and purchasing enjoyment. In the meantime, this one is available as an 11" x 17" digital print.

The design stems from blah blah blah. Nada, it was fun to create,punto. And the words are of some of my favorite Donald Byrd songs. Please support his music.

I think the first time I was introduced to Byrd (Rest In Peace) was through Black Moon out of Brooklyn. Like many hip hoppers of the time I was eager to find out where the hell these sounds they were using came from. I found that other groups such as Digable Planets, Gangstarr, Dilla, and more were sampling his work and it opened my mind to his music. I wont do a whole bio but he played traditional and fusion, and he's one of the few Jazz musicians like Ron Carter who played WITH hip hop groups instead of complaining about how they didnt get this or that. Don Was (Blue Note) wrote a nice piece about him. And peep this concert of him performing with The Blackbyrds( I think), a group of young musicians from Morehosue college who he took under his wing.Annnd the Mizell Brothers!

If anyone has connects to his family, let me know. I would love to work with them to work towards his memory. RIP.