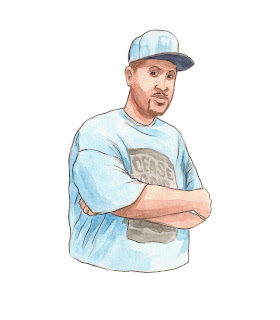 Cobe handled a situation with a young man who was about to go get involved in some funk incredibly. He calmly talked to the brother, took his mind to other options, and he checked up on him regularly. Cobe seems like the family man. As part of the Cease Fire crew, he like all of them are putting their lives on the line when intervening between hostile situations.
I re-watched the ITVS documentary “The Interrupters” about a team of Black and Latino ex-gang members and cats called “Ceasefire” who lived the life and are now acting as agents of change. They find situations where there is evidence of long standing beefs, an insult, a stare, a look, anything that could set it off-and they step in. I don’t claim to have a complete understanding of “Ceasefire”, but what they and so many others have been doing to stop us from killing each other is inspiring. Don’t let anyone tell you people of color ain’t out there trying to stop the violence; that we only get upset when a cop murders. It’s not true. Please watch the Interrupters here: http://www.pbs.org/wgbh/frontline/film/interrupters/