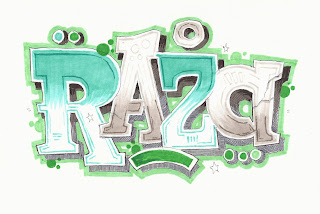 New sticker with the phrase "RAZA" which means meany things to different people. Simply put, it means "The People", gente, your folks, your family, and for many people it means a mixture of races/peoples that make up one. People who come from Indigenous, African, and European blood-mixed together through conquest, slavery, and some many other factors. I first heard the term "La Raza" from MC Kid Frost from LA, then from my Chican@ studies teacher Maestra Luna in high school. Often in protests or you'll see the term because this is a group of people who both know their whole identity and have had it erased. Some people call themselves Indigenous, Hispanic, Latino/a, Spanish, or Latinx. Whatever term you use just know the story behind it.José Vasconcelos came up with this term in 1925 in his piece "La Raza Cosmica". What I wrote below is not actually correct. But I keep it on here because...growth.

Raza. Simply or more complexly meaning "the race". The human race? Not really. More like the race of Latinos, the mixture, pride, love, and history all in one. I don't know the root of the word and where it came from but I remember the first, second and most recent time I heard it. The first was from an MC known as Frost from L.A. (I grew up in Northern Cali-hanging mostly w/ African American kids until jr. high and high school) The second was from a beautiful teacher that I had a crush on in high school named "Ms Luna" who described it with a smile. Mot recently I heard it in the lyrics of Bay Area MC Deuce Eclipse in the song "Que Pasa?" Can you remember the first time you heard this term? I know its more of a west coast thing, but I'd call myself Raza any day over "Spanish". I might have some traces in my blood but I am not Spanish.