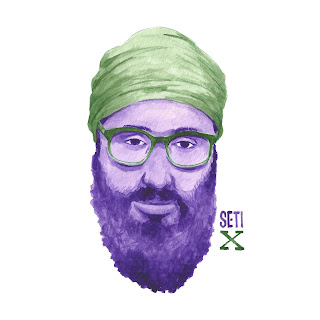 I Feel like I've known Mandeep Sethi aka "SETI-X" forever. But let me introduce him to you. Mandeep is a super kind, conscious, down to earth, and caring. Seti started rapping as a teen and turned a love of music in hip hop and traditional music to a life. He grew up as part of the Sikh (pronounced "SIC") community and almost always has his hair wrapped up. After attending the Asian Hip Hop Summit in LA Seti began to battle rhyme in a rich and multicultural environment that is LA. He would go on to make some dope material releasing 7 projects that ranged from full albums to EPs. He also performed as a guest artist on other peoples work and on mixtapes recording a huge catalogue of music.

Seti has a very sharp intellect and rhymes about police brutality, global imperialism, history, spirituality, respect for the sisters, and of course hip hop culture. In fact I've seen spit bars off the top of his head multiple times-an improvisational skill not many outside of Jazz can do. Besides making music he has toured internationally playing all across the US, UK, Canada, and India. He is a member of the Universal Zulu Nation and is an activist who makes music about political issues such as the murder of Charly Afrika by LAPD and the Rana Plaza collapse in Bangladesh. He's a teacher who has for years worked in public schools and juvenile justice system. He has been awarded by the California Endowment, the American India Foundation, and the Los Angeles Community Action Network. He's been featured on MTV's Coke Studio in India and W. Kamau Bell's "Shades of America" on CNN.

This brother has also rocked alongside cats like Mos Def, Ras Ceylon, Deuce Eclipse, Ziggy Marley, Dilated Peoples, Bicasso and Murs of Living Legends, Tom Morello, and so many more. This cat also happens to be a dope videographer that has made two documentary films. Put him on your list and sprinkle some respect on his name. You can support his music here and follow him here.

Did you see the piece I did of Yuna Zarai? Or the one of Equipto?
Email ThisBlogThis!Share to TwitterShare to FacebookShare to Pinterest
Labels: AAPI, APAHM, Art of Robert Liu-Trujillo, Asian American heritage month, asian americans, Filmmaker, Kindred Journey, mandeep sethi, MC, musician, poet, seti-x