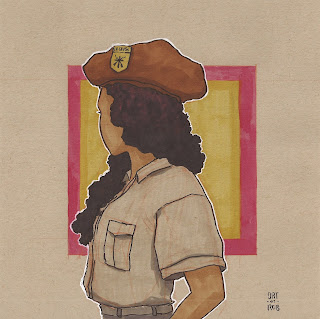 Founded in the 1960s, the Brown Berets are a community founded organization from California who organized around issues such as farmer workers rights with UFW, in solidarity w/ African Americans against police brutality, for access to education, retrieving stolen land, and to gain political power . Inspired by the Black Panther Party (Oakland) they formed a unit if mosty Mexican American high school and college students. They're part in the movement for Brown people's rights was in response to decades and hundreds of years of theft, murder, exploitation, and more by police, the US government, and by their local city officials who would of loved to sweep their righteous demands under the rug. The group still exists and were extremely powerful in organizing Brown people and for calling folks trying to deny their African and Indigenous blood (in order to look and be more white) to be proud of their heritage and identity. Their work moved beyond the voting ballot and they still work for the people today.