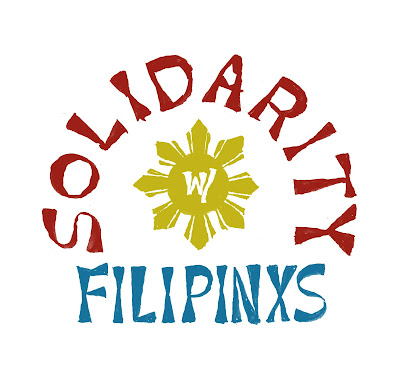 Just wanted to make a quick piece to show support for my Pinay, Pinoy, & Pinxy folks in the US and worldwide. Please pay attention to The Philippines and its diaspora because they are fighting against a dictator who is attacking anyone who is an activist for the people and land there.  Follow the organization Malaya Movement , Bayan, and the hashtags #JunkTerrorLaw and #OustDuterte . Read up on what "US Imperialism" means as it relates to this new law Duterte made, the theft of indigenous people's land, and the constant effort to keep the people from kicking any US puppets out of their country.

Since I was a kid I've heard US presidents use freedom, democracy, and justice as reasons for the US invasion, colonization, bombing of, and meddling in other countries. This government (doesn't matter the color of the politician) will sell you a line of bullshit through the media about how they're going over to (insert country) to free "them" while overthrowing democratically elected leaders by covert means in the same week. Because the majority of North American people are poor or working class they count on us not researching, reading, or connecting with Americans with ancestry and stories from these countries. But don't fall for it.

Activism and wanting people's control of the land, resources, wealth, and destiny of your home w/o the US' bloody hands does not equal terrorism.