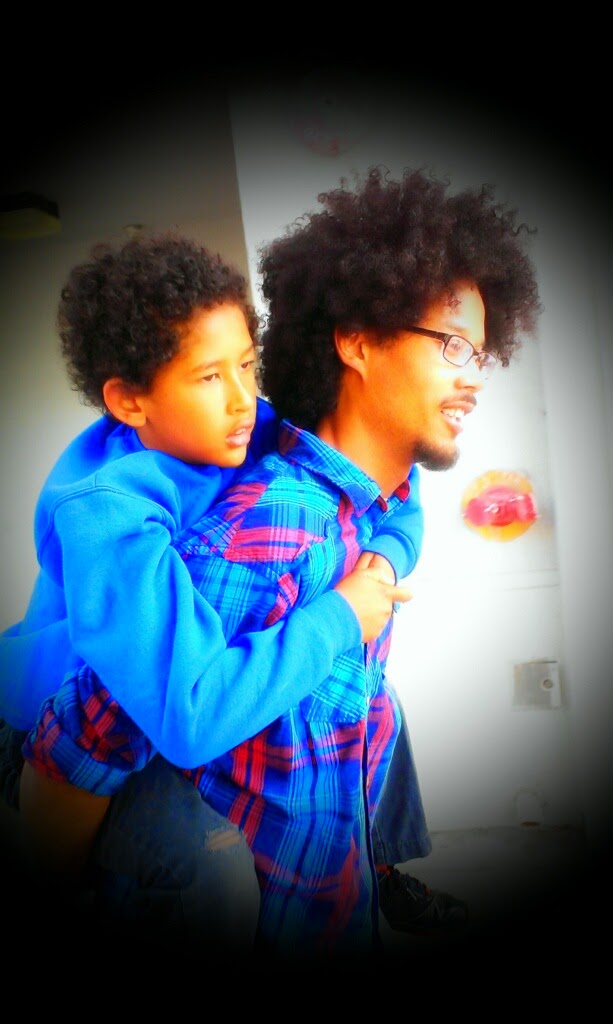 Today while walking out of the movies on father’s day I held my son on my back; giving him a piggy back ride, walking next to his mom. Strangely I was brought back to a promise I made to him when he was just a itty bitty baby in his crib. I’m sure my parents and step father made the same to me at some point. The promise was to be there for him, to be his guardian angel with or without wings (watched Maleficent). To do my best, even though I might #$%& up, and I definitely do occasionally. I lose my temper sometimes when I have passed the point of asking nicely for him to clean up his toys. I have been late to pick him up from school before once. Maybe twice. I once fed my child some moldy rice (ewww, yuck) and didn’t realize what the funny smell was. Bad dad. But, through the bumps and scrapes, I’m still here and so is he. I occasionally screw up, trying my best to make due with a graphic novel here, a smoothie there, a lesson in cracking eggs, and a regular “I Love You”. Said and done with all of my heart. This father’s day I did not spend it with my father or my step father even though I would have liked to have them both in the same room (maybe when I get married?). But, I did have a pretty awesome Fathers day with my son, his mom, a card, small gifts, ice cream, a trip to the record store, deep dish pizza, and a movie. I am a co-parent. I raise my son with my son’s mother together, through ups and downs.

I want to give a shout out to all the fathers out there today who like me have made a commitment and who will live and transition fulfilling it.  I want to say a prayer of forgiveness to any who feel shame for making a mistake, let it go and step forward. I want to say a prayer for those who are in pain mental or physical who could use our wishes. And I want to give a special shout out to the Rad Dad Collective for giving me a new place to share my energy and thoughts on parenting, even if it is just by helping other dads share theirs. I feel quite hopeful this year for new lessons and new opportunities. Peace!
-Rob

And (shameless self promoting here) in case achem* you have been under a rock or taking a break from social media, I have launched the campaign to release my first children's book called “Furqan’s First Flat Top” funded by a crowd of fathers and mothers, and book lovers like you.  Take care dads.
Email ThisBlogThis!Share to TwitterShare to FacebookShare to Pinterest
Labels: Dad Blogs, Daddy thoughts, Furqans first, Rad Dad