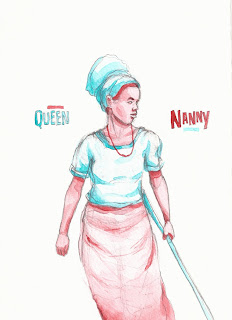 Nanny of the Maroons was born in Ghana in the 16th century. she went from being a free woman to being brought to Jamaica as a slave. The Maroons were groups of folks who fled slavery by escape or revolt and established their own societies, often in the mountains or the jungle away from the plantation. Nanny, along with many other Maroon leaders established small village strongholds; hers was known as the Portland Parish. She was known to be a great guerilla warrior and a strategist who organized counter attacks when the British tried to attack her village. The village came to be known as "Nanny Town". It is in the north eastern part of Jamaica.It was destroyed in the early 1700s but not before Nanny could free hundreds (over 800) slaves. Today there are tours of the area she once ruled in Jamaica.