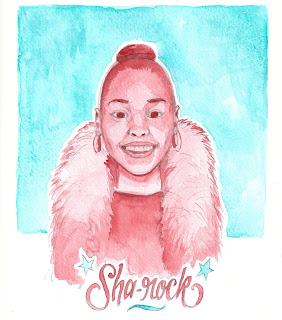 "Sha-Rock is the woman with the magical touch. I'm like burning fire! You know I'm much too much!" was the line I remember from seeing Sha Rock on the mic in Beat Street as a kid. Later on I would hear "They're four fly guys, i'm the best female. I'm telling the truth not a fairytale" while she rhymed with the hip hop legends "Funky Four + 1". Sha Rock, is one of the earliest women on the mic during the birth and pioneering years of early hip hop mcing. She's still alive and rocking, but I wanted to give her some props for Black History Month! Much love Sha, I play your records for my son so he knows the sisters were there from the start.
-Rob
Did you catch the painting of Phase 2? or Phife?
Email ThisBlogThis!Share to TwitterShare to FacebookShare to Pinterest
Labels: 28 days are not enough, Art of Robert Liu-Trujillo, black history month, black is beautiful, emcee, Funky Four plus 1, hip hop, Sha Rock, still alive and well