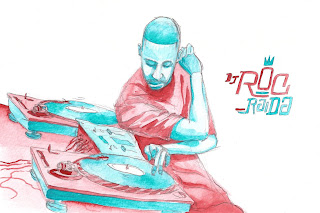 I met Grandmaster Roc Raida while living in Brooklyn. I got to meet some inspiring folks who I'd been following for years. So many I didn't get to meet. I contacted Raida and volunteered to do some artwork for his new Dj Battle called "Gong". We spoke over the phone, I showed him what I was working on which he dug, I brought it to the Knitting Factory in Manhattan and got a front row seat to draw the djs while they competed. It was an amazing battle and I was proud that a Bay Area veteran "DJ Mistah B" was in the house representing. Roc, is one of the pioneering members of the legendary X-Men/ X-ecutioners DJ crew. They represent a long line of brothers in NYC rippin shit on the turntables whether they were scratching, making mixtapes, on the radio, or party rocking. Roc and his crew did all of that. Roc Raida was an incredibly skilled Dj who won the 1995 World DMC championship after placing or winning so many other battles. Those folks who were into DJ culture knew of the Invisible Skratch Piklz(SF) vs The X-Men (NYC), and knew of Raida's rep for battling. On stage he was all business, serious as fuck. But in person he was all smiles, very kind and welcoming. Roc put out countless LPs on his own and with the crew. He DJ'd for MF Grimm and Immortal Technique I believe. He was the judge for countless battles, and he also produced tracks for many hip hop legends. He not only gave do respect to his elders, but he was putting in work for the next generation of battle djs. Known for his body tricks, I wanted to show him in one of his infamous behind the back crossfader moves. His presence is greatly missed and I hope to see more about his life's story. Respect to the X-ecutioners and the DJs that have paid tribute to him! RIP Roc Raida (1972-2009)
Email ThisBlogThis!Share to TwitterShare to FacebookShare to Pinterest
Labels: 28 days are not enough, 29 days are not enough, Art of Robert Liu-Trujillo, Battle DJ, bhm, black history month, black is beautiful, DJ Roc Raida, turntablism, turntablist, X-Ecutioners, X-Men