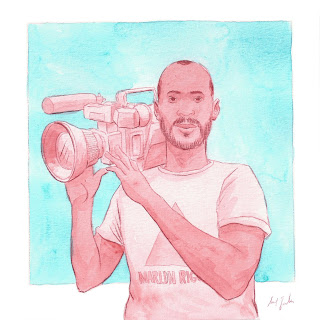 Marlon Riggs was a pioneering Black gay filmmaker. He was born in 1957 in Fort Worth Dallas and  grew up there as part of a military family and moved around a lot. He lived in Georgia and Germany as a result. Always an incredible student and queer he faced discrimination, racism, and alienation from both many people. In the mid 70s he got a scholarship to Harvard University and although he excelled academically was hiding his true sexuality. Then Marlon moved to the Bay Area where he attended UC Berkeley study film and Black history. He became a filmmaker and shot his first documentary "Long Train Running" about West Oakland blues history in 1982. He also began to embrace his sexuality and bean what would become a life long relationship with Jack Vincent. They were among the first gay couples in the Bay to apply for domestic partnership. He went on to become a faculty member at UCB an self funded and produced another film called "Ethnic Notions" about the historic portrayal of Black folks which aired on PBS. He went on to join a group called the "Black Gay Men United" and made a film called "Tongues Untied" which was revolutionary in its portrayal of queer Black men. The film received wide acclaim and criticism. Riggs would go on to make several more films, to win international film awards, to become a young tenured UCB faculty member, and to receive an honorary degree from CCAC (now CCA). Marlon learned after having kidney failure that he was HIV positive. He would later die from complications of AIDS and he vowed to not stay silent about the disease which was ripping apart both queer and straight communities across the US. Marlon was a pioneer in film, Gay pride, and Black history.