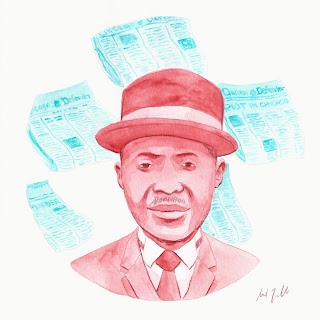 Robert Sengstacke Abbott started was a poor kid from the south who became a man of immense wealth. Not just monetarily, but with knowledge and power. Born in 1870 Robert traveled to the world's fair and was inspired by a speaker named Fredrick Douglas. He would later move to Chicago, and on the dining room table of his landlord start one of the biggest Black owned media companies; The Chicago Defender. Robert wanted to be a lawyer and went to school for it, but faced so many obstacles racially, financially, etc that he decided to start the Defender. He researched and worked hard figuring out how to get it printed and how to distribute it. And once he got it started it spread quickly. Realizing there were vast parts of Black life that White newspapers ignored Robert began covering life, death, social events, small businesses, news from a Black view point, and everything in between. He spoke about lynchings when white newspapers acted like they did not exist. The newspaper started to get around, mostly in Chicago and a few spots in the south. He bought a press, hired writers, illustrators, expanded the copies printed, and started to make a living. Then, whites in the South started to ban his newspaper. Not only because it told the truth about lynchings, but because it invited and encouraged Black folks from the south to come north to Chicago. The Defender taught new comers how to get there, who was hiring, how to find a place to live, and even what nightlife there was.  When the paper started to get confiscated, he called on a powerful union of men to distribute it; the Brotherhood of the Sleeping Car Porters who rode trains all over the US. Robert was part of a wave of Black presses that told stories about Black life and he started a parade that still happens today called the Bud Bililken Parade & Picnic in Chicago.