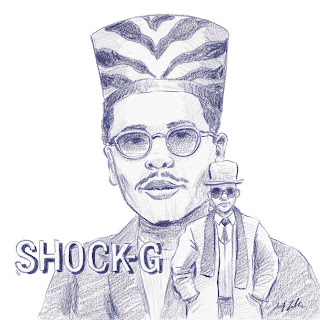 RIP to Shock G (aka Humpty Hump) the co-founder of "Digital Underground" one of the illest groups from Oakland and the Bay. The first time I bought one of their albums I was still just a kid in elementary school. "Freaks of the Industry" and "Humpty Dance" are absolute party rockers that you can still throw on today and get people moving. But some of my other favorites by DU and Shock are Man's world, April showers, We got more, Oregano flow, and of course Kiss you back, and Dowhatyalike. In his career w/ the crew he worked with so many artists and really and truly kept the funk of acts like Parliament and Larry Graham alive for the next generation. Most recently I was happy to see him in the souls of mischief doc giving praise to them but talking about the diversity of Oakland hip hop. My condolences to Money B, DJ Fuze, the DU crew, and all the fans.
Heres a portrait of Prodigy (Mobb Deep) I did when he passed as well. So many legends gone too soon.
Email ThisBlogThis!Share to TwitterShare to FacebookShare to Pinterest
Labels: Art of Robert Liu-Trujillo, digital underground, illustration, Music, Rest In peace, shock g