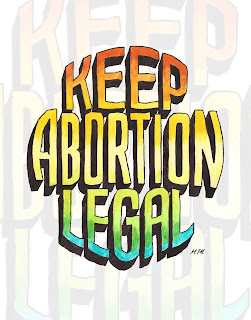 Been wanting to redraw this logo! I remember seeing it at abortion rights protests in the 80s with my mom. I can't find who designed it but it's tied to the National Organization for Women or NOW. For those who don't go to protests I wanted to let you know if you're following my work I believe in safe, legal and widely available access to abortion for all women and humans with wombs (inc gender non conforming folks).
1.  I believe whoever's body has the ability to carry a child should have the right to decide if they want to carry that child to term whether they become a parent or give a child up for adoption. To me, this is a basic human right. Non negotiable. It's no longer the dark ages, it's 2022.
2. I believe this is a form of medical healthcare. Like universal healthcare, I believe it should be accessible to all. I believe it should be free. If not free today, it should be at least affordable.
3. If you don't want to get one, it goes against your religion, or you don't subscribe to it-cool. I wouldn't force you to get one. Whether you support this form of healthcare or not should be your choice. But you don't have the right to decide what. my family does. For real, stop fucking w/ folks right to obtain this form of healthcare
4. The majority of the world does not teach about safe sex, contraceptives, or protection. Access to birth control and education on how to use it for women, men, or people with penises or vaginas is still not as widely available as it should be. This is fucking backward stone age bullshit.
5. All that talk about pro life is BULLSHIT to me! The same folks talking that noise do nothing to make healthcare universal instead of a $ making business. They do not stop the death penalty, their governments from starting wars, men from carrying out mass shootings, or men from raping. In fact what I see when I hear their arguments is thinly veiled control of women and people with wombs.
6. When we start to talk about race and class the picture becomes even more real. Not having access to abortion disproportionately affects Black and Brown people. The rich will always have more access to abortion and procedure's like it if they choose. They speak one belief while practicing another. Black women, women of color, poor or working class women and gender non conforming folks have less resources, access, and having the ability to have an abortion increases their quality of life and gives them power to decide when, how, and if they will have children.
You disagree? Cool. But just know I stand in solidarity with women, gender non conforming folks, trans folks, and anyone who wants access to abortion. Now and forever. We can negotiate what I want for dinner or what kind of clothes I like, but healthcare is a human right. We moving forward not back. Never again.
ACTION STEP UPDATE June 24, 2022: Make art about issues like this. Support the artists who make it whether that be in film, dance, music, architecture, sculpture, animation, kids books, illustration, etc. Art changes culture and awareness. If you don't make art, support artists! Their work helps organizers and activists working to change actual tangible laws and policy. Why? They just overturned Roe V Wade in the supreme court
Dig this? Peep "Stop Asian Hate"
Check out this platform laid out by the Movement for Black Lives about reproductive justice!
Email ThisBlogThis!Share to TwitterShare to FacebookShare to Pinterest
Labels: abortion, Art of Robert Liu-Trujillo, hand lettering, keep abortion legal, reproductive justice, type art, universal healthcare