Real proud of this piece for The Liberator Magazine because I stepped a bit out of my comfort zone skill wise and I'm very honored to have my art featured on the cover of such a respectable, culturally relevant, and boundary pushing magazine such as the Liberator, which has been paying dues since 2002. The Water ripple effect is one I always wanted to try but never really felt ready for until now. The next step will be pulling this off with aerosol on a wall but for now, peep the process of how I arrived at the final illustration for this piece. The process shows the sketches, the color comps, the process of photo reference-where my crew mate Cece took many shots of me modeling the position I drew, the final sketch, one of my references, and the final piece. 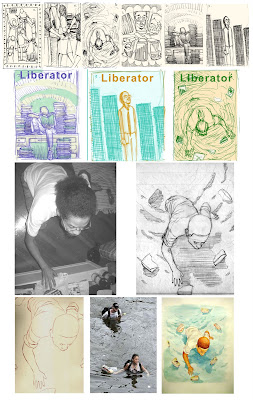 Big thanks to the homie Joseph Lamour who was art directing this. For those who live in the planet Brooklyn, this piece will be up at the Coup d' etat show from Nov. 21st, 2009 to February 28th, 2010. Definitely check out the article this illustration was created for and my homie Ilene Byers (IQ) who also has some featured illustration in this issue.One Love.
-Rob 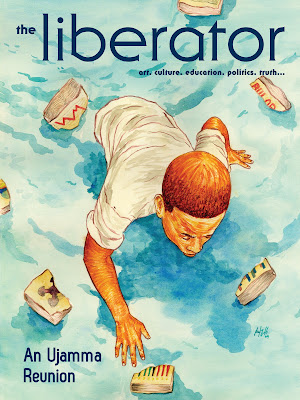 Thx Dawn, i see u doin your thang, holler if your around bklyn!

Wow man, looks like you really stepped up to this challenge and killed it! Love seeing your process shots and reference used. Niiice!

Thx Matty, your feedback is super appreciated! Glad u liked the process-i was beginning to think no one noticed that.lol.Thx bro.

This is lovely, keep up the good work!

Muchas gracias Shadrieka, thx for stopping by! Glad u like it.

found this blog from kissmyblackads.com and I love your illustrations! I like the texture and the expressions in your work.

I'll be stopping by

Thx Stan, checked out ur blog too.Wish I could go stage diving with beyonce too, it'd be me, myself, and her. Thx for ur kind wrds homie-Black ads is the $%^&!
-Rob

this is amazing, speechless beautiful! keep on

Thx Alison! Youre the illest with a numba 2 pencil and notebook paper!!!!
-Rob

many thanks for your excellent contribution. planning to feature this on the site this week..