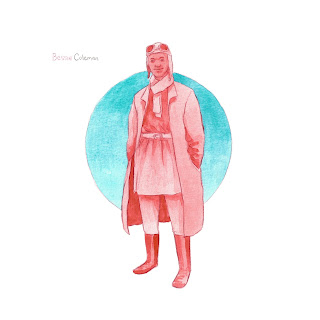 Bessie has the unique distinction of being the first African American woman to be a licensed pilot. Bessie was born in 1892 in Atlanta, Texas. She first became interested in flying around the time of World War 1. She wanted to fly but was denied because of race and gender. So, on the advice of others she went to Paris France where she obtained her pilot license and in 1921 the Fédération Aéronautique Internationale awarded her a pilot's license. She came back to the U.S. as the first to do  what she did and was greeted with respect and admiration. She began performing as a pilot in air shows known as barn storming. She also was invited to speak to schools and groups across the U.S. about her experiences. She died in a plane accident in 1926, but inspired many women of all kinds to become pilots.
Sources: Black Wings-Von Hardesty , PBS, BessieColeman.com