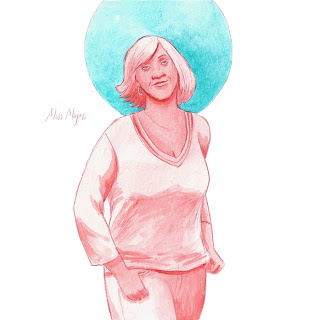 I learned about Miss Major first through the incredible artist Micah Bizant. He drew Miss Major and I wrote down her name thinking I need to know something about her too. Miss Major is a trans woman and activist originally from the south side of Chicago who came out when there were no terms like "trans" for who she was yet. She was born in 1940 and after dealing with bullying and abuse by community members found a small community of fellow trans folks in Manhattan. She was there the night of the Stonewall uprising and participated in fighting back alongside vets like Marsha P and Sylvia Rivera. Later she moved around, eventually settling in the Bay Area. She has over the years been a constant voice and role model for young trans black women because she has spoken out against mistreatment, neglect, and ignorance. She spent time in prison and also advocates for trans prisoners locked in a system that does not understand them. Recently a documentary about her life was made by Annalise Ophelian and Storm Miguel. I am just learning as I go, but as a straight man of color wanted to give some props to Black trans folks who should be an integral part of Black history month! Miss Major is still kicking ass and is the former Executive director of the "Transgender GenderVariant Intersex Justice Project".
Sources: Wikipedia, Major! (doc),  tgijp.org