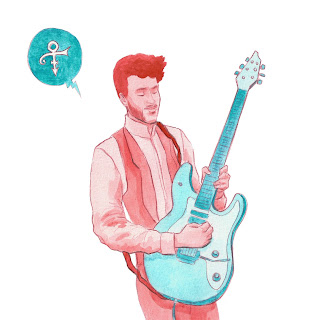 I found it extremely difficult to act like everything was normal the day I heard Prince transitioned to being one of our ancestors. I used to come to my aunt Liz's house and every single time I visited she would be playing this movie. It was Purple Rain and it felt like she watched it all the time. Later I would come to the realization that folks were playing this guy's music all around me. I came to know him myself as a fan really when Graffiti Bridge came out. One of my favorite songs "New Power Generation" from that soundtrack went like this

"Pardon me for living, but this is my world too
I can't help that what's cool to us, might be strange to youPardon me for breathing, borrow some of your air?The problem with you and your kind is that you don't know love is there

Pardon me for thinking,  something under my hairI bet you thought the lights were on but no one's living thereYou think that if you tell enough lies they will see the truth?I hope they bury your old ideas the same time they bury you"

And as a kid, I took it as a middle finger to the established order of things. Maybe not traditional Rock N' Roll, but definitely a system the prides itself on exploitation of others and the use of war anytime someone challenges that pursuit of exploit. Prince was sexy, he showed boys and girls another way of being; both feminine and masculine. And still confident, in charge, and commanding of attention with his immense talent for writing, producing, and performing music. Funk, Jazz, Soul, Rock, and even some Hip Hop all mixed in. It was clear to me as I got older, the more i listened to his records all that he studied, which he was sharing with us. And in some heels. I'm not going to give you the history of his life, but I will say thank you. Thanks for inspiring me to be unique and to take my craft seriously. Prince 1958-forever. And if you are new to his music, keep an eye out for the old and new records, get in where you fit in.