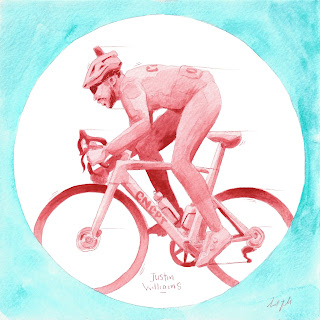 This is Justin Williams, one of the fastest people on a bicycle right now. Justin is from South Central Los Angeles by way of Belize. He grew up with cycling in his blood and started racing at the age of 14. He's 30 now and has been a bit busy not only winning races but blazing a path for more Black folks and people of color to enter the very white world of cycling. After racing with many teams and trying to assimilate into this world, he decided to create his own team (Legion of Los Angeles) and just be himself. That means bringing some style the cycling world isn't used to seeing. It also means providing mentorship and a home for more to start racing. As a young man he mentioned being inspired by Rahsaan Bahati (cyclist) and is inspiring countless people young and old. People are literally coming up to him and his younger brother Cory Williams (who also races) and asking them to sign their copies of Bicycling magazine (where I first saw him).

Justin described racing by not only using your legs, but your shoulders, you head, your mind, and your whole body to win. And win he does. Justin is the 2018/2019 Road Race National Champion, the 2018/19 Crit National Champ, a 10 time National champion, the 2018 UCI Cross Country Classic, 2017 PRT Dana Point Grand Prox, 2017 B.C. Superweek Ladner Grand Prix, and the 2017 Sprint Class Grand Prix winner. Known for his speed and power Justin has raced all over the US and internationally. Besides having family support he is also sponsored by Specialized Bicycles, Shimano, Rapha, and MedTerra CBD's. Most people consider the Tour De France the pentacle of racing, but I think Justin is bringing more eyes to the "Crit" or closed circuit course where you have to be the first in shorter faster races. He is living Black history. Follow his journey.