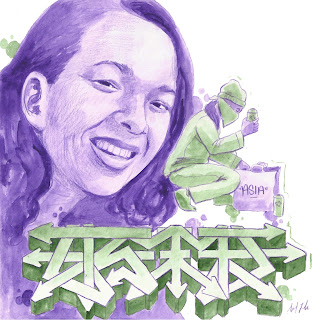 As a teen obsessed with graffiti I dragged my parents to go snap pics of pieces and throw ups. Asia is one of the artists I'd see. She inspired me not only to be proud but to be stylish. 20 years later I spoke with her thx to DJ Willie Maze.
Born in Japan in the early 70s, she grew up in San Francisco and started writing in 1991. One of her early influences was a young woman who wrote like NME who gave her the name "Asia". Later it was King 157, Spie, Giant, and a guy named "Orfn" who was up everywhere in the 90s who inspired her. Crew wise, she was down with VC which included Muet and Duer. She's still down with TDK (Teach Dem Knowledge) and had a crew of sisters called HMP- "Her Mighty Presence".
Asia was most active in the Bay between 91-95 before moving to NYC in the late 90s. Although she bombed out there she told me New York was on a whole other level. When I asked her about some of her proudest moments she quickly mentioned the "Tax Dollars Kill" production TDK did with every damn body in the crew. It was in magazines and it got a lot of attention! She also mentioned a mission her and Muet went on to bomb a tank!! A Tank!
When asked about advice for young women getting into Graff/art she said "It's hard to do, but be free of judgement by others. Don't be concerned about how they see your work. As long as you enjoy it, that's what matters. Do it for yourself, your soul".
Although she doesn't write anymore, she still makes art for herself.  She said she was motivated to piece  by TDK, but she really loved was to hop buses and go bomb! She didn't document most of her stuff and wasn't thinking of legacy, but she really loved it and had so much fun doing it. If you're reading this and remember "Asia" PLEASE share a word or photo for her to see! Respect to OG Asia!
Sources: Interview w/ Asia
The last asrtist I painted is Hung Liu! And check out this drawing of Lady Pink 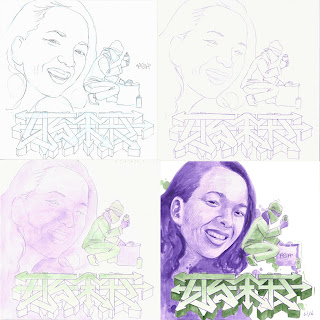