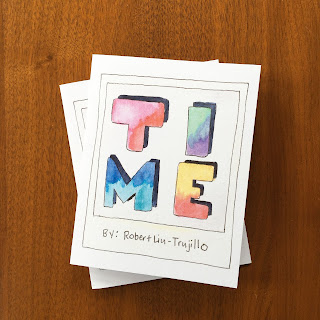 Fam, here's a new published piece! "Time". It's 8 pages long and I completed it in a few days. It's a mini comic and a zine of sorts. I started working on my first zine in 2007 and did quite a few until the early 2010's which is when I started getting work as a kids book illustrator and self publishing my own kids books. I 'm trying to strengthen my comics muscle so I decided to make this mini as I work on other comic shorts. Its much looser than I would even draw, but the goal was to finish it. Which I failed at before. And I got to debut it at TCAF (Toronto Comics and Arts Fest).
Its about a theoretical crush and is very nostalgic as I was thinking of the days of jr high and high school when I would get dressed hoping to sit next to my crush in class. Its a PG comic so most kids can read it.
Cop one here.
Here's a post I wrote last yr about past zines.
Email ThisBlogThis!Share to TwitterShare to FacebookShare to Pinterest
Labels: Art of Robert Liu-Trujillo, comics, crush, mini comic, Time, zines