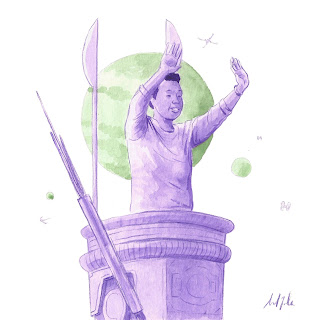 Doug Chiang is the vice president and creative director of Star Wars. He's been working in the film industry for over 30 years and is one hell of an illustrator. You've seen his work. And I was super inspired to see him in the extras or behind the scenes of Star Wars films. Originally from Taiwan (Born in 1962) he grew up in Michigan and made his way to California. He started on "Pee Wee's Playhouse" a show I watched as a kid. His first film as a concept artist was "Back to the Future 2" and he has worked on Ghost, Terminator 2, Forrest Gump, Jumanji, and so many other films. In 1995 when I was just beginning high school he went to work for George Lucas who was developing the prequel Star Wars films. He designed ships, spacecraft, sets, costumes, and characters for the first three films along with Star Wars 7,8,9, Rogue One, Solo, and most recently The Mandalorian. In between SW projects Doug founded his own studio called Ice Blink" which would become Image Movers Digital. He became a published author and has won Aacademy, Bafta, Clio, and now Oscar award. As I mentioned he's now the creative head of all new Star Wars projects from films, amusement park rides, games, etc. And the thing I love most about him besides his ridiculous skill as a painter and illustrator is his ability to keep pushing for the best idea. You can tell he iterates and tries as many directions as possible to get the most out of an idea. It's incredible to watch. And the dude is humble. Hats off to Doug. Follow him here.
Sources: Lucasfilm, Imdb, Wikipedia, Robota
Dig this? Check out the last post about Bay Area Graf writer ASIA
Did you see this one about Special FX artist and model maker Fon Davis? 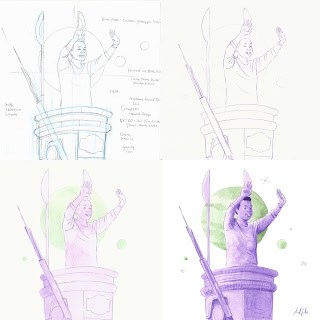