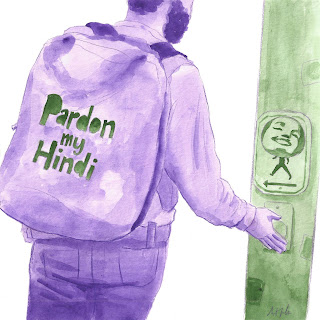 I've been seeing this dude's work here and there and its dope! If you're not already familiar with "Pardon My Hindi" aka Chiraag Bhakta. This cat is from Jersey, and his story of growing up in a hotel very much reminded my ok Kelly Yang's MG book "Front Desk". He is known for collaborating with hip hop duo Das Racist, animator Sanjay Patel, Basement Bhangra pioneer DJ Rekha, and jazz musician Vijay Iyer. He he's a graphic designer, street artist (you've seen his stickers), and I'm trying to think of whats a cool way to describe what he does and I cant do it justice. But he has made exhbitis like #whitepeopledoingyoga which seriously and hilariously critiques the columbusing of an OG South Asian culture being appropriated by white folks and capitalism. He did this photo project about Indian families who own and run motels called "Arch Motel", and he currently has a show up in NYC called "This Only" which I highly encourage you to check out. I can't believe I missed his Bay shit , but I will be there at the next one. This dude is hella smart, witty, and on point when it comes to critiquing colonialism and assimilation. And I love how he's a collector who shares some beautiful mixes of Asian and American culture. What it's like to survive the madness that is the US. Nuff respect fellow artist and hip hop head!
Sources: Saada, Verve Mag, Mother Jones (what an article dude!)
Ok this year I'm doing artists. Did you catch the last one of Doug Chiang
Last year I did two pieces feat South Asians- My brother SETI-X and Raveena
Email ThisBlogThis!Share to TwitterShare to FacebookShare to Pinterest
Labels: AAPI, APAHM, Art of Robert Liu-Trujillo, asian american artists, Asian American heritage month, Chiraag Bhakta, designer, gallery installation, Pardon My Hindi, street art