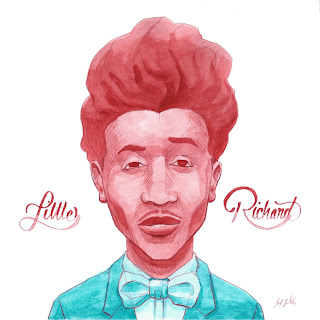 There have been so many articles written about this brother recently that I'm not sure I can add much historical value. So I'll start with the first time I saw him. It was in a film called "Down and Out in Beverly Hills" which I watched with my Grandmother Doris. In the film he yelled at the police and his white neighbor about unequal treatment and in real life Black artists deserve more.
Little did I know this man had been making music since my Grandparents were teens being that they were born around the same time. Born in 1932 in Macon Georgia, Richard was one of twelve children. He learned to play in the church like so many Black musicians. The hollering Pentecostal church believed in worship through music and speaking in tongues. He began making hits in the mid 50s before anyone was making Rock.
He is the king of "Rock N Roll". In his career he released over 24 albums, acted in over 30 films and TV shows, and he's featured in over 200 TV and films soundtracks. He has been inducted into the Blues, Rock n Roll, Apollo, and the Naacp hall of fame. He toured the US through the chitlin circuit and across Europe. He aided, helped, and birthed artists like James Brown, Jimi Hendrix, Billy Preston, The Rolling Stones, The Beatles, Elvis, Pat Boone, Jerry Lee Lewis, and more. His style pioneered a whole new genre of music which young people are STILL enamored with today. His style was unapologetically fly, queer, and gender blending.
If we love Black artists like Janelle, Thug, Andre, and Frank for doing their thing and living their true selves, we have to look back and view the life and career of Little Richard.  Blues, Rock, Gospel, and I am grateful for him.
Sources: Wikipedia, Arsenio Hall, American Bandstand, The Guardian, Imdb
Did you catch the painting of Sister Rosetta Tharpe?
Or the last one from 2021-Willy T Ribbs
Email ThisBlogThis!Share to TwitterShare to FacebookShare to Pinterest
Labels: Art of Robert Liu-Trujillo, Black artists, black history month, black is beautiful, black is beautiful 2021, Little Richard, Richard Penniman, rock n roll